In November 2016, thanks to the kind support of Protezione Civile, Feltre section, I had the chance to spend four days in the area of Tolentino (province of Macerata, Marche) with the aim of surveying some medieval sites which were recently affected by the 2016 Central Italy earthquakes. Although set slightly away from the epicentral area of Amatrice, Pescara del Tronto and Norcia, this area was very badly affected by the seismic sequence which began on the 26th of August, with 9,000 people in Tolentino displaced as a result of the earthquakes. This offered me the opportunity to directly document the damage caused by a recent earthquake to medieval buildings and infrastructures, and, on the other hand, to explore an area which potentially preserves evidence of past and, in particular, medieval seismic events. We already know that this sector of the central Apennines was struck by earthquakes in AD 1279 and 1328. However, the fact that local medieval seismicity is poorly known is quite evident: for example, the oldest recorded event affecting Tolentino dates back only to the end of the 17th century! (1672: source http://emidius.mi.ingv.it/CPTI/). It is therefore quite clear that the Maceratese, as well as Central Italy as a whole, presents unique research opportunities for the analysis of medieval seismic disasters, due to the seismic hazard which characterises this region and the impressive network of medieval towns, villages and monasteries which developed here since the Early Middle Ages (which is actually the topic of a paper we have in preparation). As a result, I believe a future research project is required to further explore and document this gap in our knowledge of past earthquakes. I am happy to attach here some pictures of the centres and monuments I visited in Tolentino, Caldarola, San Severino, Cessapalombo and Piobicco, Sarnano, all in the province of Macerata (Marche).

I take advantage of this post to underline the fact that people affected by earthquakes need our economic support (the damage inflicted by the disaster was yesterday calculated to total at least 7 billion euros). Every little helps. You can donate here (via bank transfer):

A special thanks is due to the fantastic people who supported me in this fieldwork whom I list at the bottom of my post.

Tolentino is located in the mid-valley of Chienti. The town became an urban commune in AD 1099 and preserves a medieval layout, defined by the 13th centurywalls. Among the most notable medieval and early modern buildings and infrastructures, are the Cathedral of San Catervo (with early Christian and medieval phases), the monastic complex of San Nicola, founded in the 13th century, the romanesque Church of San Giacomo, the romanesque-gothic church of San Francesco, the romanesque house of Friar Sillabus (13th century),the 14th century ‘medieval house’ in via Ozeri, the 13th century city gates and walls, and the Ponte del Diavolo (Devil’s bridge), completed in 1268. The communal palace has medieval origins, but was re-modelled in 1860. My photographic report starts from this structure, as it is directly linked to the local seismic culture (the palace was affected by an earthquake in 1703). Then I present some damage visible in the cathedral of San Protervo, the church of San Giacomo, and the medieval Devil’s bridge. Finally some pictures focus on the town walls and gates of Tolentino, which present possible past seismic damage and show a characteristic building technique which might relate to an earthquake resistant design.

The medieval town walls of Tolentino were erected in the 13th century but later re-modelled in the 15th century (Semmoloni 2016, Tolentino. Guida all’arte e alla storia, p.154). They are constructed using a particular building technique, characterised by alternating courses of sand stone and bricks. In the Eastern Mediterranean this technique is known as hatil, which is a common feature in Bizantine and Ottoman architecture.

Caldarola is a town located about 25 kilometres southwest of Macerata which flourished during the late Middle Ages. At its amazing historic centre are the Palace and Castle Pallotta (documented since the 9th century), named after the cardinal who patronised the re-modelling of these buildings in the late 16th century. At the time of my visit, the entire centre was considered the ‘red zone’, and all the inhabitants living in this area had been evacuated. Therefore, the access to the town was not permitted without the escort of a fireman to supervise the area. Here, I would like to thank Davide Morelli who escorted me in Caldarola. Below are some images of the damaged historic buildings I saw there.

San Severino is another wonderful medieval centre, located along the river Potenza about 25 kilometres southwest of Macerata. The medieval town developed around a hill fort occupied since the Iron Age, and later became a Roman town under the name of Septempeda. During my visit, I had the chance to survey the top area of Monte Nero, where the medieval castle and the dome of San Severino (attested from the 10th century) lie, along with the southern slopes of the hill. I was unable to visit the urban agglomerate which developed at the foot of Monte Nero, around the majestic Piazza del Popolo. The pictures below show recent and past seismic damage which affected some of the medieval buildings across this site. In particular, the area of the castle was severely affected by the 1997 Umbria earthquake. 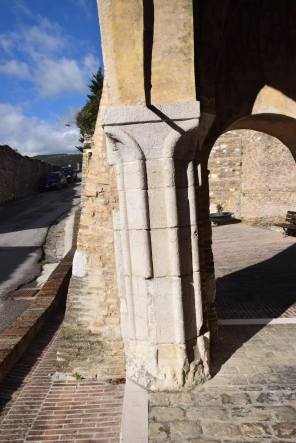 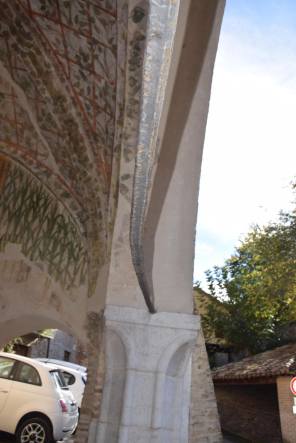 Cessapalombo is located in the high valley of the river Fiastrone, in a wonderful position on the edge of the Monti Sibillini National Park. The Abbey of Santa Maria in Insula or San Salvatore, in the village of Monastero, was founded by San Romualdo in 1009 on the site of a former small Benedictine church dating back to the 8th century which itself had previously been built on the site of a Roman building. The monks lived there until the first half of the 11th century when they transferred to San Ginesio. When they returned in 1281, the monastic community renovated the building due to its structural problems and poor state of preservation. The 12th century Romanesque crypt is of particularly note as it is one of the few to be almost entirely preserved (source: http://www.turismomacerata.it/en/abbeys/san-salvatore-or-santa-maria-insula).

The repairs undertaken in 1281 could refer to a post-seismic restoration of the Early medieval building. As mentioned above, the area was struck by a destructive earthquake in 1279.

The Abbey of San Biagio (originally known as Santa Maria) was founded in 1030 and consecrated in 1059, whilst the dedication to San Biagio dates back to the 15th century. The abbey flourished during the 11th and 12th centuries which was followed by a phase of progressive decadence ending around the middle of the 13th century when the the monks abandoned the structure. The church is the only part of the old abbey which still remains, as over time the structure has been transformed in such a way that it is difficult to identify the original layout.

The church was severely damaged by the 2016 earthquakes, as shown by the following pictures, comparing the church before and after the seismic event.

I would like to thank all the fantastic people who supported me during my time spent in and around Tolentino. Firstly, all the volunteers of Protezione Civile of Feltre, with particular regards to Giorgio Bottegal (the section’s president) who very kindly brought me there, and Giangi Viezzer and Sandro Facchin who took me out to San Severino. Then I must mention the wonderful Tolentino volunteers of the soup kitchen at the Istituto Comprensivo G. Lucatelli and the fireman Davide Morelli, my exceptional guide in Caldarola. This was an eye-opening experience for me, and everything I learnt there was possible because of the support of these people. I hope this work is simply the initial phase of a more complete study which this region deserves from many points of view. 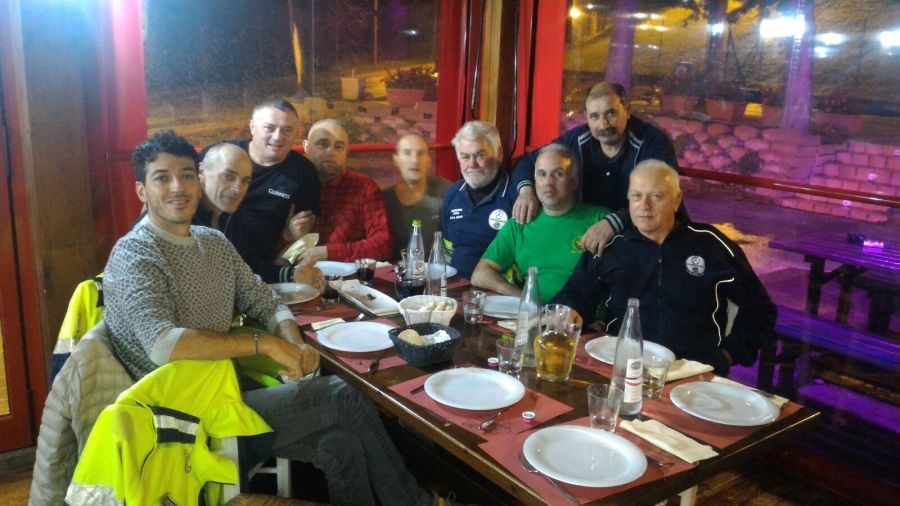